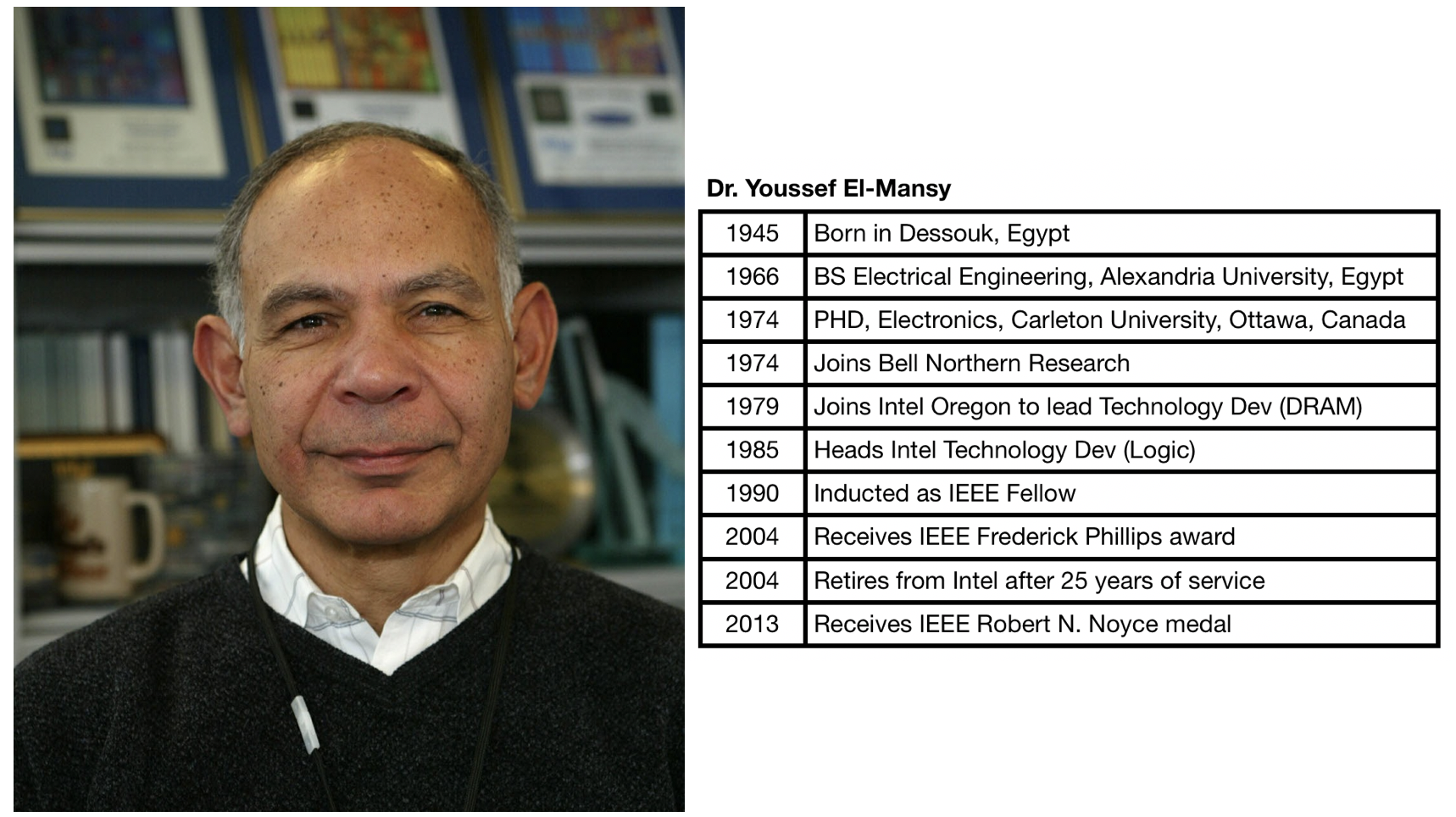 One of the key attributes of Moore’s Law is the introduction of new generations of manufacturing technologies at a 2-year cadence.  Over the last several decades, these technology generations have provided huge improvements in function, cost, speed and power consumption of electronics. As a result, electronics have multiplied, and are still multiplying their way into all crevices of life.

For 25 years, Youssef El-Mansy led the definition, development and introduction of 12 such technology generations.  The first 3 were DRAM (memory) technology generations and the last 9 were Logic (processor) technologies. History has recorded these spectacular achievements and the industry has bestowed on Youssef, one of its highest honors – the IEEE Robert Noyce Medal.

As an Intel employee, I followed Youssef throughout his career, but I only got to know him up close when I started reporting to him in 1996 till his retirement in 2004.  Youssef, I felt, was cut from the same cloth as Andy Grove. Both of them exemplified the Intel values of Results Orientation, Risk Taking and Discipline.

Youssef set big goals year after year. He once said in a meeting, “We don’t take goals because they can be done; we take goals because they must be done. Then we figure out how they are to be done.”  Through his mastery in making decisions and his engaged leadership in execution, he always managed to steer engineers to get it done. He developed a culture in which challenges were met head on and hiccups in Moore’s Law cadence were not accepted as possibilities. Every roadblock had to have a solution and every opportunity had to be seized.  He made us demand of ourselves, inventions in real time to make this happen. Our focus on results was fierce.

Youssef considered process technology as the central driver of Moore’s Law cadence.  And he saw defining technology (design rules) as the most important component compared to development and introduction. He paid special attention to the definition process. “I delegated a lot to everyone who was capable, but I never lost control of technology design rules”, he told me in 2019. That meant being deeply engaged over the long haul and making critical decisions at the leading edge of Physics. If you went to his office when he was not in the weekly technology program meetings, chances were that he was reading technology papers to stay on top of it.

Sustaining such a deep engagement in execution did not come easily. Distractions, priorities and focus needed to be ruthlessly managed.  Fortunately for Youssef, Sunlin Chou was his manager and partner during all of his Intel career. Sunlin headed the technology and manufacturing group.  Between them, they had an agreement on what each would do. Sunlin dealt with corporate and external matters, influencing Intel’s Board and the industry to make the big bets needed for Moore’s Law. This gave Youssef the bandwidth to practice engaged execution. Their partnership was exemplary in mutual respect, complementary strengths, and effective rapport. When I look at the two, I see Sunlin as a master storyteller of Moore’s Law and Youssef as its master executer. The story of Moore’s Law was created by strong conceptual thinking and, more importantly, by their joint observation of results Youssef was achieving – actual technology introductions approximately two years apart, give or take 6 months.

Youssef’s visions and his decisions were clear and courageous. Early in his Intel career, he took great personal and corporate risk by agreeing to execute the now famous transition out of DRAM and into Logic technologies.  He still remembers his conversations with Intel executives and recalls that time as a “proud moment”.

Much later, he changed the established Research-Development-Manufacturing phases of a technology life cycle by inserting a phase called Pathfinding between Research and Development to better carry the results of research into technology definition and development. He placed Pathfinding in the able hands of Mark Bohr, Intel’s senior fellow in technology.  This well-executed change proved to be highly successful and embedded itself in our DNA.

Before he retired, he sowed the seeds for the risky innovations of Hi-K metal gate transistor (45nm) and the three-dimensional transistor (22nm), the latter hailed by Gordon Moore as the biggest change in transistor architecture in the 40 years of Moore’s Law.

“Copy Exactly!” was Intel’s methodology for replicating a new technology generation across multiple high-volume factories. It rested on the principle that there is a time to develop technologies and a time to replicate those technologies for production.  It was very important for engineers to know exactly which phase they were in and to act accordingly. This was easier said than done. “If you are an engineer in the factory, you don’t want to copy; you want to invent,” Youssef once said. He gave considerable thought to the guidelines of copying a developed technology. He also gave thought to controlled innovation after copying, to continue improving product performance and manufacturing yields. He captured his thoughts in the form of a “Copy Exactly!” statement signed by him and two leaders of production fabs.  I remember sitting in an auditorium listening to all three of them discuss what “Copy Exactly!” was, what it was not, and real-life guidelines on how to practice it.  What followed was a spectacular culture transformation across the vast lands of Technology and Manufacturing in Intel, enabling unimaginable, predictable production volumes for every technology generation. Years later, Youssef described that joint statement as “a victory for Copy Exactly!”. But in reality that victory only signaled the start of immense hard work and disciplined leadership of the cultural transformation that followed.

To Youssef, enforcing accountability was essential for reinforcing excellence in culture. He held everyone’s feet to the fire and did not tolerate incompetence, mediocrity and waste.  I remember a staff meeting in the 1990s in which a supplier’s executive was trying to summarize the reasons and corrective actions for a major disruption they had caused in our development factory.  It was clear that the speaker was offering a pound of flesh to Youssef. Youssef meanwhile was looking at an empty wall with a solemn face.  This was disconcerting to the speaker and he paused. Youssef, after a long pregnant pause of his own, said “When are you guys going to stop doing this to us?”.  He was interested not in extracting that pound of flesh, just in the supplier’s soulful commitment to never do it again. Discussion stopped at that point, and I could only imagine the post-meeting conversations among the meeting’s attendees.

Youssef knew discipline was a key enabler of efficiency. He used to say that anyone can finish his/her day’s work in time to enjoy life after work. “If you cannot do so, you are not disciplined enough,” he said.  His interactions were a great example of his economy of both words and time.  When I started reporting directly to him, we scheduled regular one-on-one meetings between us.  A colleague advised me that I should wrap up such meetings when Youssef started looking out through the window because that meant he was done. For months I never saw him do that, not because I successfully captured his attention for the whole meeting, but because I ran out of things to discuss after the first 15 minutes. He never hurried me, but he did not encourage me to show my loquacious personality either.  His intensity and obvious regard for efficiency in communication demanded that every word was said with a purpose.  As he saw it, without that, it would be wasteful to the both of us, and most importantly, to Intel.  In those short conversations, he managed to give me meaningful direction, to show that he valued me, and to leave me feeling empowered.