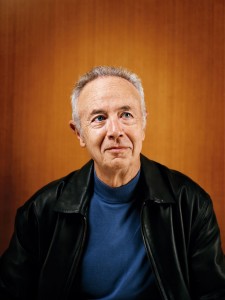 You are gone. And with you, gone is one of the greatest leaders of our times.

In the coming days many voices will speak about the ways in which you touched countless lives, inspired a generation of engineers to create and fuel the digital revolution, and demonstrated your own brand of leadership traits in pursuit of excellence. My voice is one such voice as I bid you farewell and thank you for all you did for humanity.

From you I learned how to make results more impactful with focus, discipline, and assumed responsibility. You showed what it means to be on top of the issues you managed. If there was a detail you did not know, it was because it was not important to the mission. If there was a detail that was important to the mission, you knew it. There was not an answer for which you did not have a good question. You were unapologetic about being on top of it. You were unafraid of being called a micro-manager. You were comfortable with discomfort. You were driven by, and to, quality results.

From your decision to get out of memories, I learned the concept of constancy of purpose and flexibility of paths to it. From that decision, I also learned what management courage truly is.

You introduced us to the practice of Constructive Confrontation.

People like me who got to watch you perform understood what you meant by it. I taught it in Intel’s management classes in the 90s and tried to practice it in my Intel career. I used to explain that it is all about confronting and resolving issues head on and not about attacking and destroying persons involved. The practice of Constructive Confrontation resulted in intense efficiency with which Intel achieved amazing results during the 80s and 90s.

But this practice faded away as you faded away from Intel. I believe the word confrontation was too much for the post-Grove generation of managers to combine with the word constructive.

In 1989, I was part of a cross-section of mid-level managers at Intel attending a five day learning retreat called “Managing Through People” in Monterey California. Your Q&A session with us was the highlight of that retreat. During the 2 hours you spent with us I studied you as you tried to understand our questions with intense respect. Your answers were crisp, honest and insightful. We, the growing and hungry fibers in Intel’s management muscle (that is what you called us in that session), found your answers very useful. That day I promised myself to learn how to listen like you and how to think like you. I remember asking you how, when you were growing up in your management career, you handled the discomfort in your peers resulting from your intensity and focus. You seemed to understand exactly where I was coming from and said that you did not pay attention to any of that. Then, with a smile on your face, you said that I just need to make sure I am right more often than I am wrong.

You were infectious. You infected me and shaped me.

Good bye Andy. Peace to you and thanks to you.